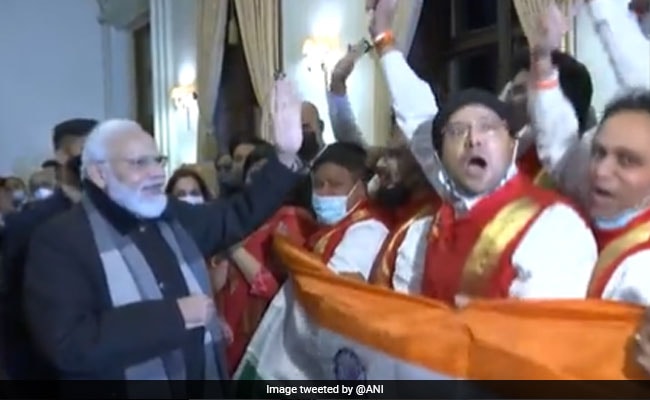 Prime Minister Narendra Modi was cheered and welcomed with songs by Indian community members as he arrived at a Glasgow hotel ahead of the UN climate talks.

“Landed in Glasgow. Will be joining the COP26 Summit, where I look forward to working with other world leaders on mitigating climate change and articulating India’s efforts in this regard,” PM Modi tweeted on Sunday.

A large group of Indian diaspora representatives greeted him with chants of “Bharat Mata Ki Jai”.

They were all lined up holding the national flag, some clapping, some singing and some offering the namaste as the Prime Minister walked the stretch taking in the applause and cheer. He too waved back at the assembled group.

Some turned the songs around to praise the Prime Minister: “Is desh ka yaaron kya kehna, Modi hai Bharat ka gehna (What do we say about this country. Modi is our nation’s pride)”.

The Prime Minister, who flew into Glasgow from the G20 Summit in Italy, is set to begin the UK leg of his European tour with a meeting with community leaders and Indologists based in Scotland on Monday morning.

Next up will be the opening ceremony of the World Leaders’ Summit (WLS) at the 26th Conference of Parties (COP26) to the United Nations Framework Convention on Climate Change (UNFCCC) at the Scottish Event Campus (SEC) in Glasgow, where he is set to address the summit plenary session.

“India is among the top countries in the world in terms of installed renewable energy, wind and solar energy capacity. At the WLS, I will share India’s excellent track record on climate action and our achievements,” PM Modi said in a statement ahead of the summit.

India’s focus at the COP26 Summit will be on the country’s “ambitious” Nationally Determined Contribution (NDC) goals for the post-2020 period under the Paris Agreement.

Prime Minister last attended the COP-21 in Paris in 2015, when the Paris Agreement was concluded, and whose implementation commences this year.

At COP-26, the parties will work to achieve the completion of Paris Agreement implementation guidelines; the mobilisation of climate finance; actions to strengthen climate adaptation, technology development and transfer; and keeping in reach the Paris Agreement goals of limiting the rise in global temperatures.

ReformerNews - December 3, 2021 0
The politics around Oxygen started with the second wave of Covid-19 and some states went to courts and showed increased demand for oxygen...
© ReformerNews 2021. All Rights Reserved
%d bloggers like this: