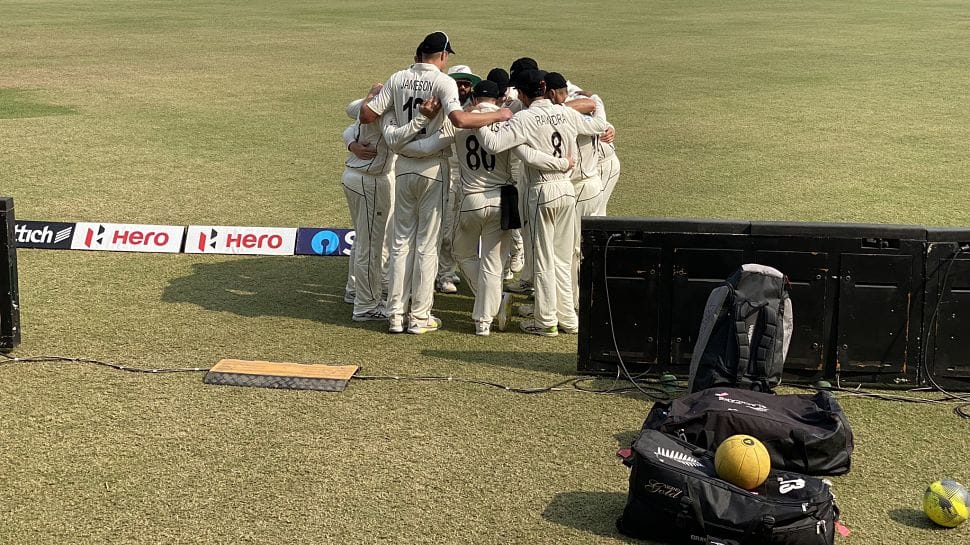 India are taking on New Zealand in the first of the two-match series at Green Park in Kanpur.

Shreyas Iyer and Ravindra Jadeja smashed fifties on Day 1 of the Kanpur Test. Playing in his first Test. Iyer showed no sign of nerves of pressure and went on professionally about his job.

Jadeja too was brilliant, while batting at 4, reaching his 17th Test fifty.

India had a good day in office overall.

However, off it, on twitter, a Pakistani user created a storm by tweeting that there were Pakistan Murdabad chants heard at Green Park stadium in Kanpur.

He wrote on his twitter: “Disappointing to see that instead of concentrating on the cricket, some fans in the stadium at Kanpur were shouting Pakistan murdabad”

Disappointing to see that instead of concentrating on the cricket, some fans in the stadium at Kanpur were shouting Pakistan murdabad #INDvNZ #Cricket

Another twitter user had posted the video of the chant. In the sixth over of the India innings, the fans began to chant ‘Jeeta Bhai jeetega, India jeetega’ but it should changed to ‘Pakistan murdabad’.

non sanghis & bholas were mad at pakistanis for trolling nz with “security” chants. must be feeling garv __ at the crowd chanting “pakistan murdabad” in a match unrelated to pakistan lmao.pic.twitter.com/ELrCtY4id8

Don’t worry. d Downfall of India has begun already. d narrow-mindedness,Extremism & Sectarian Politics will eventually sabotage India. Journey towards world Leadership is halted. And irony is that Indians don’t acknowledge this & somehow defend this for being patriotic.

What are you expecting from them?
Side effects of 24th Oct!

Vow…. Thats great… It means WT20 defeat is still in the mind. Come on guys we won and moved forward. Re group and challenge us again _

Why are you giving them importance even? Their wounds of lost to Pakistan __ in T20 WC are not yet healed.

On the pitch, India find themselves in a strong position as they have reached 258/4 at the end of Day 1. Only 84 overs were bowled on first day of the Kanpur Test due to the bad light in the last hour of the day’s play.

Shreyas Iyer stood out for India. He slammed his maiden fifty and will resume his innings tomorrow at 75. Jadeja made 50 off 100 balls on day 1.

Virat Kohli Given Out LBW By Third Umpire: Here Is How The Cricketing Fraternity Reacted | Cricket News

Don’t Know If I Will Ever Walk Again But Lucky To...

ReformerNews - December 3, 2021 0
Former New Zealand all-rounder Chris Cairns does not know if he will ever walk again but says he is lucky to be alive...

Virat Kohli Given Out LBW By Third Umpire: Here Is How...

ReformerNews - December 3, 2021 0
The cricketing fraternity reacted to the LBW decision against India captain Virat Kohli on Day 1 of the India vs New Zealand second...

ReformerNews - December 3, 2021 0
Xiaomi 12 rear panel image has been leaked suggesting the camera design of the smartphone's vanilla model. The image shows the phone with...

ReformerNews - December 3, 2021 0
<!-- -->Israeli firm NSO Group has denied all claims of wrongdoing in relation to Pegasus (File)New Delhi: The government has "no proposal for...
© ReformerNews 2021. All Rights Reserved
%d bloggers like this: